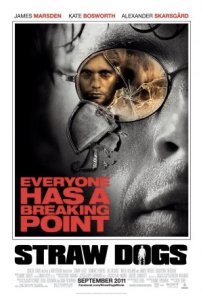 In the chaos of the weekend I somehow managed to catch a movie. Straw Dogs. And if one had asked me hours before show time if I intended on seeing the film, they would have earned a blank stare. However it turned out to be a film I would consider seeing again. Actually, it turned out to be a lot of things. Turns. That’s what this film was all about. Possessing minimal familiarity with the films’ previews, I was expecting one thing, and undoubtedly got another.

I reckon that those like myself, who never saw the original which featured Dustin Hoffman, were intrigued with how the climax and conclusion pieced together. The film was engaging and emotionally intense. Definitely worth the eight bucks!

"The words you speak become the house you live in."
View all posts by Sirelle Carter →
This entry was posted in Film and tagged Dustin Hoffman, James Marsden, James Woods, Kate Bosworth, remake, Straw Dogs. Bookmark the permalink.