Dress Positively. It was the underlying message of Anna Wintour’s monthly editorial address in which she pleads with the reader to ‘keep that in mind’ when out shopping this spring.

Global superstar Adele covers the March issue—that also moonlights as Vogue‘s annual Power Issue—and after raking in six Grammys just over a week ago, one would be disturbed to argue against her selection.

In a ten-page spread authored by Jonathan Van Meter, the singer bares all—figuratively of course—and seduces readers into extending their imaginative love affairs with her. 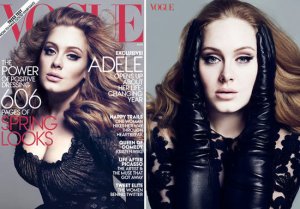 Keeping relative to the music theme, tabbed as the issue’s It Girl is musician Esperanza Spalding. Spalding won a Grammy for Best New Artist in 2011.

The issue also features the leading women of the revolutionary social media company, Twitter, and chronicles their [and the company’s] relocation to its’ new East Coast headquarters.

The 600+ page issue is already in circulation.