1. Alabama: Many of the experts have casted doubts on the Crimson Tide’s ability to repeat as national champions. This is largely due to the program losing eight starters — 6 on defense — to the NFL Draft. However, the Tide enter this season boasting arguably the best offensive line in the nation. With Saint Nick roaming the sidelines for the sixth season, I see no obstacles blocking a Crimson Tide repeat. 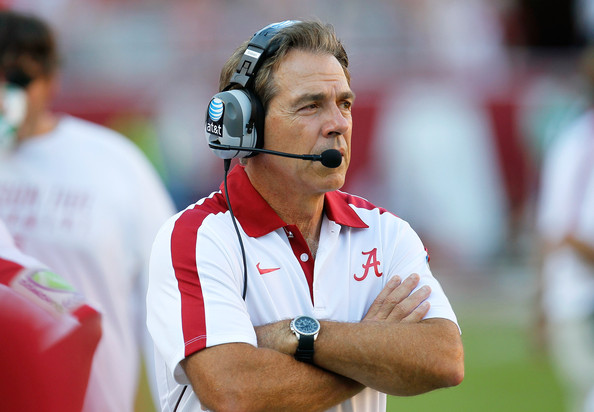 2. Southern Cal: Senior quarterback (and Heisman favorite) Matt Barkley is as polished and poised as it gets. Paired along with Lane Kiffin — in his third season as head coach — this teacher-pupil tandem lead the Trojans from the shadows of NCAA sanctions. Returning All-American wideout, Robert Woods — and adding junior Penn State transfer, Silas Redd, to the offensive backfield — the Trojans look to don the nation’s most prolific offensive unit this season.

3. Oklahoma: It seems like an eternity since “Big Game Bob” actually won a big game. However, lead by quarterback Landry Jones (preseason Heisman candidate), this 2012 Sooners squad seems to possess a bit of promise. Wideout Kenny Stills is a bonafide playmaker who can crib it at any moment. Pairing this veteran offense with a defense lead by safety Tony Jefferson, and returning defensive coordinator, Mike Stoops, the Oklahoma Sooners are on a mission to restore greatness in Norman.

4. Louisiana State: I have a nearly impossible time fathoming the notion that losing Tyrann Mathieu doesn’t serve as a severe detriment. Nonetheless, with Les Miles in his eighth season at the helm — and the defense returning preseason All-Americans Sam Montgomery (defensive end) and Eric Reid (safety) — the Tigers will manage to overcome adversity.

5. Oregon: For the reigning Pac-12 [and Rose Bowl] champions, it’s hard to argue that the Ducks can capitalize on their 2011 campaign after losing Darron Thomas and LaMichael James. But I’ll argue it. Entering his fourth season, Chip Kelly will roll out perhaps the most talented defensive unit he has had since taking over in Eugene. And with the dynamite tailback duo of Kenjon Barner and De’Anthony Thomas in his arsenal, Kelly will keep his team in the national title mix; although the November 3rd trip to Los Angeles will arguably determine the Ducks national title hopes.

6. South Carolina: The epitome of a dark horse. Creeping behind Alabama and LSU, the Gamecocks have the talent and ability to win the SEC East. However, will their schedule play nice? In October alone, Steve Spurrier & Co. will tango with Georgia, and visit both Baton Rouge and Gainesville. Pending his health, electrifying tailback Marcus Lattimore will stake his claim for the Heisman, while sophomore defensive end, Jadeveon Clowney, wreaks havoc on opposing offenses. Lead by these two — and the Old Ball Coach — if the Gamecocks can manage to overcome their October obstacles, they’ll cruise to Atlanta in December.

7. Arkansas: The upper echelon of the SEC’s Western division is getting quite crowded. As the third top-10 squad in the division alone, the Razorbacks look to overcome losing head coach Bobby Petrino to scandal. But with the return of tailback Knile Davis (injury) and quarterback Tyler Wilson, this high-powered offense will certainly keep the national race interesting.

8. Florida State: In year three as head coach of the Seminoles, this is the season where Jimbo Fisher elevates his program to the next level. Tallahassee is a place where mediocrity is an allergen. In 2012, look for touted prospects from that top recruiting class of 2011 to become household names. Linebacker Karlos Williams and defensive lineman Tim Jernigan highlight the front seven, along with senior end Brandon Jenkins. Defensive backs Lamarcus Joyner and Nick Waisome will need to elevate their play due to the loss of Greg Reid. With the defense executing their assignments, and quarterback EJ Manuel groomed to have sensational senior season, the Seminoles should have no troubles winning the ACC.

9. West Virginia: The Mountaineers are very intriguing. As Big 12 newcomers, their high-powered offense — you know, the one that put up 70 points in the Orange Bowl against Clemson — should have a seamless transition into a conference that has adapted almost completely to the spread phenomenon. Coach Dana Holgorsen’s guys love to play for him. On the field, the Mountaineers will be lead by Heisman dark horse candidate, quarterback Geno Smith, and they will certainly look to make some noise in the Big 12. 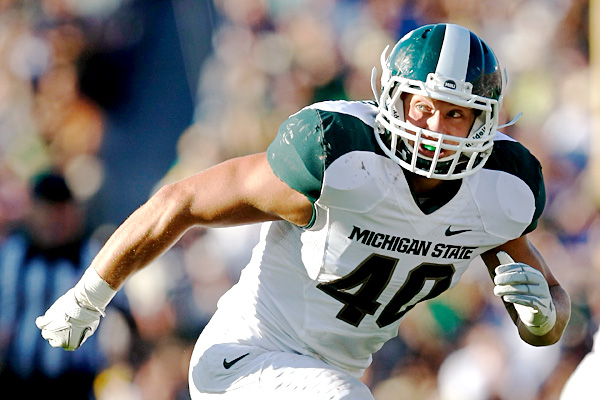 10. Michigan State: Excluding standout tailback, Le’Veon Bell, the Spartans lose virtually their entire offense. So initially, I had zero intentions of them making this list. But then I thought about their defense. I watched some film, and let me tell you — these guys are really going to upset someone’s Saturday. Head coach Mark Dantonio and defensive coordinator Pat Narduzzi (a no-brainer future head coach) motivate the unit to play every down with a chip on their shoulder. As a result, the offense will rely heavily on the play of the Spartan defense in 2012, but being lead by end William Gholston — and linebacker Max Bullough — the defense won’t let them down.