With the NBA Playoffs in full swing, we the fans are privy to all-access coverage, extending far beyond the games. Having said that, perhaps the most striking images are the off-court slam dunks and turnovers of today’s NBA style icons.

Coco Chanel once proclaimed that, “Fashion fades, only style remains the same.” A declaration that certainly summarizes the panache state of the National Basketball Association. Be that as it may, it seems to be widely unremembered how the league arrived to its present trendy era.

It was prior to the 2005-06 season that Commissioner David Stern implemented a mandatory dress code. Stern’s regulations governed that “all players must dress in business or conservative attire while arriving and departing a game, on the bench while injured, and when conducting official NBA business.” Almost immediately, the verdict was met with much indignation. Fast-forwarding to today, the pageantry of oversized jeans and fitted caps, marinated by complementary do-rags are long gone.

Initially loathed by the players of the past, superstars of the present have so strongly embraced the dress code, that many people seem to have forgotten it exists. Magazine spreads, tailored Italian suits and front row seats at Fashion Week are a sign of the times; as these elements now set the style standard of the NBA.

As they do with most things, the players have made style a league-wide competition. While several players are battling for the lead, it would be hard to argue that reigning MVP, LeBron James, isn’t winning the couture arms race he arguably ignited.

In the spring of 2008, James appeared alongside Gisele Bündchen on the cover of American Vogue. It was then that the world grew conscious of James’ luxury flair. Since then, the hardwood phenom has also twice appeared on the cover of GQ. But while his style is globally saluted, James stated in a March 2012 interview with British GQ that he doesn’t have a preferred one. He declared, “I’m pretty flexible. It’s all about confidence, man!”

The mode doesn’t stop with the league’s most valuable player. Various other top NBA stars have equally made a name for themselves in the fashion world. Since joining the New York Knicks in 2010, Amar’e Stoudemire has collaborated on a clothing line with designer Rachel Roy, and become a regular at both New York’s Mercedes-Benz Fashion Week and the Met Gala. But Stoudemire’s most notable coup may have been cozying up to American Vogue Editor-In-Chief, Anna Wintour. As a result, he was the subject of a feature editorial in the publication’s April 2012 issue.

James and Stoudemire aren’t the only ballers with Miss Wintour on speed dial, however. James’ Miami Heat teammate, Dwyane Wade, has also established a relationship with the fashion maven. Wade appeared in the magazine twice last year, while also holding a joint signing with the editor during last fall’s Fashion’s Night Out.

There is a common denominator between the aforementioned players. They all play in “big market” cities, such as Miami and New York. But what if you play for a franchise in a smaller market.. are you lobbed out of the limelight? Not if you’re Russell Westbrook! As point guard of the Oklahoma City Thunder, Westbrook’s style of play on the court reflects his style off of it: showy and electric.

Prior to his injury — that has sidelined him for the remainder of the playoffs — Westbrook generated buzz with his post-game press conference attire. Red-framed glasses and flamboyant patterned, print shirts have become a trademark for the 24-year old.

Although Westbrook is limited to hidebound Oklahoma several months a year, he manages to stay fashionably relevant. He took in a plethora of the Spring 2013 shows in New York City last summer; most notably Billy Reid, and Richard Chai. And when GQ came calling to have him model — print shirts — for their January 2013 issue, the 6-foot-3 guard dished them the assist. 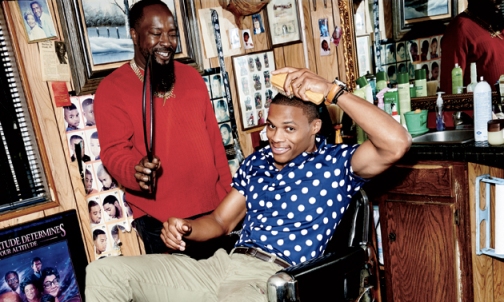 Reflecting, it seems that Commissioner Stern knew what he was doing when he implemented a dress code. Not to say that Stern took international fashion magazine spreads into account, necessarily, but the objective was to dress up the league. And whether it be LeBron James linking with Audemars Piguet, or Kobe Bryant being named ambassador for Hublot, one would find it difficult to suggest that the players aren’t benefiting from a more polished NBA.