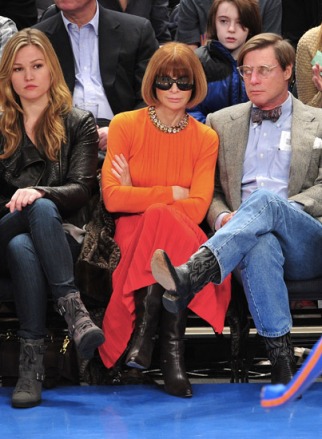 As the 2014 Spring/Summer collections dazzle runways across the globe, the only attraction that sends photographers in a frenzy — aside from the fabrics and supermodels who grace them — is Anna Wintour. Unofficially ordained as pope of the fashion industry, Wintour’s front row presence at a show can say more about the brands than the garments that sustain them.

Though having said that, in recent years, the editor-in-chief of American Vogue has also become a fixture elsewhere — court side.

Infamous for her low profile in the public eye, Wintour — an avid sports fan — manages to catch quite a few sporting events annually. She has been spotted at Madison Square Garden, several times, since the New York Knicks acquired superstar forward Carmelo Anthony — most notably in the spring of 2012, when she waited outside the visitors locker room, to say hello to Miami Heat guard Dwyane Wade.

As a result, Wintour has built mutually beneficial relationships with the athletes. Wade has been featured in Vogue, on more than one occasion; as well as Knicks big men Amare Stoudemire, Tyson Chandler and the aforementioned Carmelo Anthony. However, only reigning NBA MVP LeBron James has appeared on the cover.

The basketball court isn’t the only court she fancies. Wintour’s love for tennis is no secret. A regular at grand slam tournaments, she can often be seen observing from the boxes of the sport’s biggest stars — such as Serena Williams, Roger Federer, and Novak Djokovic.

Part of Wintour’s genius has been her ability to gauge the pulse of mainstream culture, and the young talent that highlights it. This was evident as she mingled with Oklahoma City Thunder guard Russell Westbrook, at the recent Rag & Bone show, during New York City’s Mercedes-Benz Fashion Week earlier this month. Judging from history, it wouldn’t be surprising if Wintour bounced Westbrook a feature in an upcoming issue of Vogue.