In Lift Off — masterly authored by Jason Gay — Bullock informally lets her guard down, disclosing how her role in Gravity came about, and what life as a mother is like. Set in Austin, Texas, the actress details how she first came to call the Southwestern metropolis home; telling Gay that “I felt like myself.” 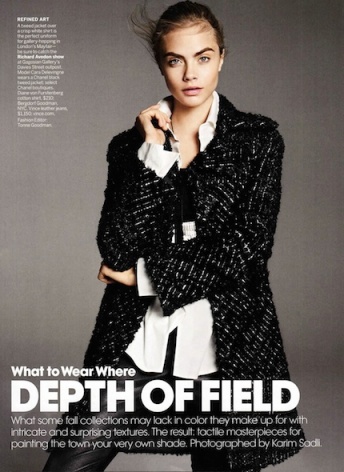 Cara Delevinge models some of the season’s most elaborate texture pieces — from tweed jackets to turtlenecks — in What to Wear Where: Depth of Field.

The editorial Whisper Campaign — authored by Sally Singer — chronicles the silent resurfacing of Stefano Pilati, as the new creative director of Agnona. After a decade as the creative head of Yves Saint Laurent, Pilati’s objective for Agnona is “to define and establish notions as seasonless, timeless, regionless,” as he stated to Singer. His first collection is now available in stores.

And because three’s a charm, Vogue tabs socialites Kate Foley, Chelsea Leyland and Kyleigh Kuhn as this month’s It Girl’s — branding their collective style as ‘delightfully casual’.

The issue rounds out with feature editorials of Tory Burch, Mollie Ruprecht, and US Senator Rand Paul of Kentucky.