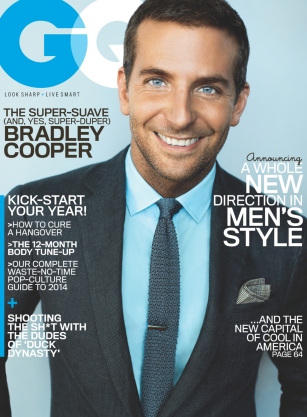 Making his US debut as the magazine’s cover boy, Bradley Cooper looks back on his rise to A-list stardom, in the cover story written by contributor Zach Baron.

Cooper has evolved quite a bit since his one episode stint as Jake on Sex and the City (he kissed Carrie, but who didn’t?). And prior to The Hangover trilogy, the actor was best known for his role as Rachel McAdams’ fiancé “Sack” — a character he refers to as “a fucking tyrant” — in Wedding Crashers (2004).

In 2012, Cooper starred in David Russell’s Silver Linings Playbook. The 39-year old co-starred with Jennifer Lawrence, in the comedy-drama that garnered them both Academy Award nominations, with Lawrence winning Best Actress. Fast forward to present-day, and Cooper is co-starring in another Russell-directed film, American Hustle, which is receiving outstanding praise. In the film, Cooper plays an overzealous FBI agent who may very well be his own worst enemy.

Among lifestyle features, GQ Endorses — via its monthly manual — Tokyo as the the greatest shopping city on the planet, The Only Six Tools You’ll Ever Need, and educates the reader on piecing together the perfect suit in 2014.

The issue also encourages the reader to pick up a book this new year, with titles such as The Painter (Peter Heller) and Shovel Ready (Adam Sternbergh) making their list of suggestions.

Los Angeles, California is christened — although anything but christlike — as America’s next great city, in an editorial that features the renaissance of Downtown Los Angeles.

Model Dylan Penn — yea, Sean’s daughter — is perhaps the issue’s most electric (their word, not mine) feature, and she labels the rumors of her dating Robert Pattinson as being “all bullshit.”

Athletes Fallon Fox, Peyton Manning, and Thierry Henry — who models Parisian suits — are the relative features for this issue.

But no feature has created stir like that of Duck Dynasty patriarch Phil Robertson. In an intriguing Drew Magary editorial, Robertson spoke the God’s honest truth — according to him — which wound up getting him briefly suspended by his network employer. If you haven’t yet read the piece, do so! The issue is currently available on newsstands.