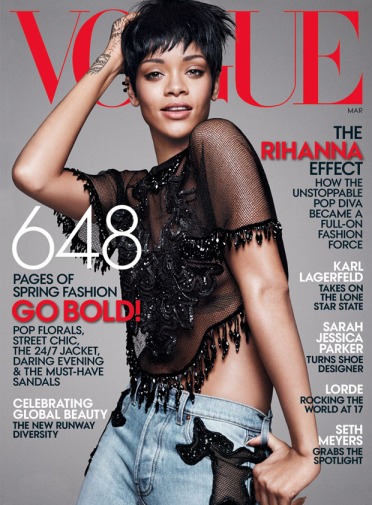 “For the longest time now, the music world has been without a performer whose regular unveilings of new look after new look left us all waiting for her latest transformation,” however, according to Anna Wintour — via her Letter from the Editor — Rihanna is it.

While the RiRi love affair may start with Vogue, it certainly doesn’t end there. Pucci’s Peter Dundas compared the megastar to Kate Moss; while Balmain’s Olivier Rousteing declared, “She is Wonder Woman!!!” The March issue marks Rihanna’s third cover.

Girls actress Allison Williams is the issue’s It Girl, and admitted, “I feel more comfortable on a red carpet than I used to.” Turning 26 next month, the Yale graduate recently got engaged to CollegeHumor co-founder Ricky Van Veen.

“Texas pretty much saved Coco Chanel,” Vogue avers. In Paris, Texas, Vicki Woods chronicles the relationship between the city of Dallas and the House of Chanel — and its recent Métiers d’Art showcase in Big D.

It was nearly 60 years ago that Coco Chanel believed her recent collection had been a disaster, until it was purchased by a local Dallas retailer — Neiman Marcus. Afin de répéter, “Texas pretty much saved Coco Chanel.” 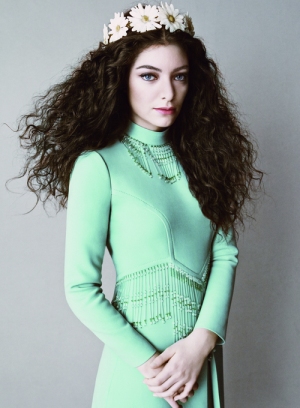 Pop music’s latest sensation — Lorde — is profiled by Nathan Heller, in Teen Spirit. Of the seventeen-year-old, Heller states that, “Despite her youth, her style emerged almost fully formed, borne by her smoky vocal tones.” Lorde recently took home a Grammy — Song of the Year — for her chart-topper “Royals.”

Despite the fact that Miranda Priestly sardonically labeled florals for spring “groundbreaking,” eight years ago, flowers are indeed the créme de la créme this spring season. What to Wear Where: Petal Pushers exhibits an array of trendy botanic looks from Gucci, Valentino, and Giorgio Armani, among others.

On newsstands, the issue also features wise guy Seth Meyers, on the heels of his debut as host of Late Night.