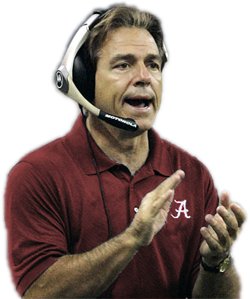 1. Florida State: The Seminoles welcome yet another docile schedule, despite the fact home match-ups versus Notre Dame and Florida may warrant upset alerts. They won the national championship last season, but lost several key contributors to the NFL Draft in the spring. Fortunately (and most importantly) Heisman-winning quarterback Jameis Winston returns, along with four starters on an offensive line many are deeming the best in the nation. The defensive side is where the Seminoles suffered the most critical losses, with leaders like Tim Jernigan and LaMarcus Joyner moving on to the NFL. Even so, the Seminoles boast one of the nation’s top defensive backfields.

2. Alabama: All the pressure is off the Crimson Tide, and that’s arguably when they’re at their best. With that being said, the fate of the Tide’s season will rely on the currently vacated quarterback position, as three-year starter AJ McCarron is now in the NFL. The general consensus is that Florida State-transfer Jacob Coker — an Alabama native — will earn the job. If that holds true, Coker will inherit the best receiving corps in the nation, led by All-American junior wideout Amari Cooper. Chris Black and Robert Foster are also receivers to look out for. The running back unit is sensational, as the top three rushers could start anywhere in America. And although two All-America defenders were lost to the first round of the NFL Draft, the defense still ranks among the nation’s best — led by All-American safety Landon Collins.

3. Oklahoma: Riding momentum of a Sugar Bowl victory, the Sooners enter 2014 with one of the top defenses in the country. The unit is highlighted by pass-rushing linebacker Eric Striker and defensive back Zack Sanchez. Wide receiver Sterling Shepard is the X-factor on offense, even with a majority of the buzz surrounding quarterback Trevor Knight. Most importantly, Knight will have returning starters anchoring both tackle positions. The schedule, for the most part, plays in their favor — although things could get interesting with back-to-back games against Baylor and Texas Tech in November.

4. Michigan State: The Spartans are coming off an historic season, in which they were both Big Ten and Rose Bowl champions. Beastly defenses have become the standard in East Lansing, and this one will be anchored by end Shilique Calhoun.  Their offensive line may very well be the best in their conference, and will be responsible for stud quarterback Connor Cook and tailback Jeremy Langford. If the receivers simply play to their potential in 2014, the Spartans will be in prime position for a championship run.

5. UCLA: This is the year the Bruins piece it all together. This team is loaded with talent, as head coach Jim Mora has 15 total starters returning. Everything begins and ends with quarterback Brett Hundley, who is poised to lead the Bruins to the conference mountaintop. The schedule will be grueling, but with another year of experience under their belts this roster is built to withstand it. Looking at the glass half full, at least the Bruins play host to Oregon, Southern Cal, and Stanford.

6.  Auburn: Talent-wise, this is an elite squad and the Tigers will set out to prove that 2013 was no fluke. But this team suffered critical losses to the NFL Draft this spring, mainly on defense. Nonetheless, returning defensive lineman Carl Lawson will cause the opposition’s offense tremendous chaos. For their own offense, quarterback Nick Marshall will look to continue exploiting opposing SEC defenses. With electric pass-catching targets in Sammie Coates and juco transfer D’haquille Williams, Marshall should land right back in the Heisman discussion.

7. Oregon: Quarterback Marcus Mariota returns to lead yet another electric backfield for the Ducks, along with tailbacks Byron Marshall and Thomas Tyner. On the opposite side, defensive coordinator Don Pellum is new to the position — but at least he’ll have All-American cornerback Ifo Ekpre-Olomu leading his unit. Keep an eye on an October 2 matchup versus Arizona as a possible trap game before heading to UCLA.

8. Georgia: Two words: Todd Gurley. The talented tailback may be the best player in America when he’s at full health, thus the Bulldogs’ offense is highlighted by him. Hutson Mason is the quarterback at the helm now, and will be surrounded by a tremendous collection of skill players. But this team may be even scarier on defense, as it returns nearly all of its starters from last season. The front seven — especially the linebackers — may arguably be the best in the nation. If Georgia plays to their potential, it may result in another division title for head coach Mark Richt.

9. Ohio State: The Buckeyes feature the best defensive line in college football. But the key to success for this team will rest upon the health of quarterback Braxton Miller, and how the running game fares now that tailback Carlos Hyde has departed for the pros. On paper, a November trip to Michigan State looks to be the only challenging matchup. Even so, one can never count out a road trip to Happy Valley against Penn State (Oct. 25). Key members were lost to the draft, but the 2014 squad is loaded with premier young talent.

10. Southern Cal: The Trojans are back! Cracking the top ten, Southern Cal will boast one of the nation’s nastiest defenses — headlined by safety Su’a Cravens and All-American tackle Leonard Williams. Steve Sarkisian has returned to Los Angeles, but is now the head man in charge. His offense will feature one of America’s best wide receivers in Nelson Agholor. The Trojans are in their final year of NCAA sanctions, but even so expect this team to create chaos on the national scale in 2014.