In the utterance of basketball great Shaquille O’Neal: Birdman, Birdman! 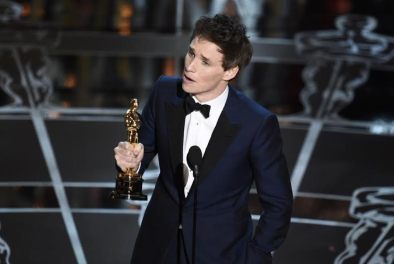 Grand Budapest Hotel also took home four Oscars on the night, but it was Birdman in which The Academy awarded with Best Picture, Original Screenplay, and Cinematography honors.

Continuing the trend of British dominance, Eddie Redmayne (The Theory of Everything) won Best Actor for his portrayal of physicist Stephen Hawking. Redmayne is the third British-born actor to win the award in the last five years, with Daniel Day-Lewis and Colin Firth completing the triangle.

Redmayne delivered one of the more feel good acceptance speeches in recent Oscars memory, exuding pure jubilation, shock, and gratitude. And that was the theme of the night: captivating speeches.

Like never before, this year’s winners utilized acceptance speeches as platforms to spread awareness for social, political, and self-awareness issues. Best Supporting Actress winner Patricia Arquette (Boyhood) unshakably, yet gracefully, advocated for wage equality and equal rights for women in America; while Iñárritu used one of his many acceptances speeches as a platform for immigration. The Mexican filmmaker expressed his plea for future immigrants to be treated “with the same dignity and respect of the ones who came before and built this incredible, immigrant nation.”

Having expressed that, perhaps no moment was as commanding as when musicians John Legend and Common were awarded the Oscar for their Original Song, “Glory,” from the Selma soundtrack. Minutes after their riveting performance — that notably brought actor Chris Pine to tears — the two musicians accepted their award and reminded all that the civil rights movement is as much apart of the present as it is the past. While this year’s Oscar’s may not have been as “entertaining” as last year’s, from a cultural perspective, they served a critical purpose.

The red carpet was as glamorous as ever. With recent headlines reporting that business at Saint Laurent has doubled since the hire of Hedi Slimane, it came as no surprise to see two of Hollywood’s brightest, young starlets — Dakota Johnson and Margot Robbie — opt for designs from the reemerging brand.

An isolated crystal shoulder strap was the focal point of Johnson’s red gown, while Robbie’s deep V neckline seemed to coincide with an unspoken theme that the gowns of Lupita N’yongo (Calvin Klein) and Scarlett Johansson (Atelier Versace) also featured.

The blush-toned Atelier Versace gown of Zoe Saldana — who gave birth to twins just three months ago! — was another noteworthy design, but it was the red, scalloped Givenchy haute couture gown worn by lead actress nominee Rosamund Pike (Gone Girl) that was the SCO favorite.