94 minutes. That’s how long he fought off death.

From the listed “Time of Injury,” to the pronounced time of death, he was as stubborn as the genetics he passed on to me.

The entry on line 33d of the death certificate instructed to describe how the injury occurred: MULTIPLE GUNSHOT WOUNDS.

It was a powerful line, 33d, in the sense that it’s the line that ultimately shattered the spirit of a seven year-old boy, when he asked his mom: “How?”

I recall so much of that third grade picture day vividly. But never, for as long as I shall live, will I grasp what it was about my mother’s answer, “He was shot,” that sprung me from a suffocating living room, to the threaded embrace of Buzz Lightyear within a matter of seconds.

“You’re too damn smart for your own good,” he used to say to me. And in hindsight, October 10, 1997 was the one day I wish I hadn’t been. Because I understood the reality all too well. He was gone.

I think about the last time I saw him. Not at the basketball game, a few nights before, but that afternoon in my dream. I’d drowned myself to sleep in a pillow of tears.

That stoic, straight-lined smile staring down at me; and his palm, the size of a baseball mitt, cupping my head. Even in my dream, his scent of vanilla and cocoa butter mixed on him in a way that it didn’t mix on anyone else. His eyes revealed his worst kept secret: that he loved his son with the strength of 10,000 hearts. 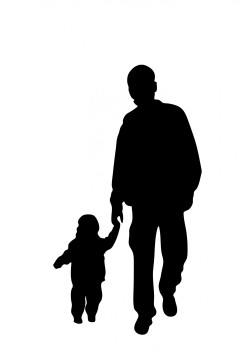 Twenty years later, to the day — today — I hear my aunt’s voice playing back to me via voicemail. “Was calling to see how you was doing. We all know what the day is. And I know your dad looking down on you, smilin’, and very proud of you. He’s very proud of you, and so am I.”

I could listen to her talk about him forever. They could finish each other’s sentences, those two. I need to call her back.

I unfold his death certificate far more often than I should, I know that. But I feel something every time. A cluster of emotions, really. Especially at Box 16. RACE: Black.

Not because of our race. I wouldn’t trade what I am for anything in this world; rather, the dark irony. Early on, he’d built his reputation on statistics; and in the bangs of several bullets, he became one.

His life was more than a tally, or, body count for the city of Detroit. He had the heart of a giant. And somehow, without transplant, he gave it to me. Because, like him, I love so incredibly deeply that it hurts — and I don’t know if it was his greatest gift, or a curse.

What I do know, is that October 10, 1997 has taught me the most invaluable lessons. Dealing with loss, dealing with death, can shape the soul of a person in the most unimaginable ways. I’m certainly no exception.

On December 26, 1992, my dad penned a letter to my great-grandmother, “Granny”, in which he closed it, “And remember the Love that is waiting always for you and you alone.”

I now have that letter. And it’s that Love that gets me through the days when I need it most.

"The words you speak become the house you live in."
View all posts by Sirelle Carter →
This entry was posted in Signed Sirelle and tagged dad, death, loss. Bookmark the permalink.